I had the throttle cable snap on me last week on the way to work, luckily just after I had left the motorway! I managed to do a quick fix to get me to work and home again though.

Now came the time for cable replacement! I was hoping this would be a quick job, one hour max really!

I started by removing the pan underneath the front of the bus. This is there to mainly just protect the mechanics below the pedals from dirt etc. 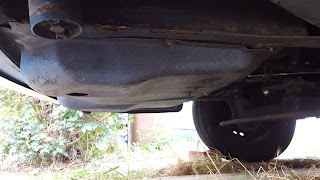 I released the cable from the clamp in the engine bay to allow movement to release from the pedal lever. 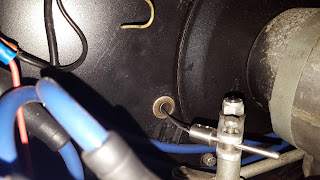 In this pic you can see the temporary fix to get me home again!

For my first attempt I cut the cable just before the metal hook and little collar, then taped the new cable to the old. I tried to pull it through but this failed almost straight away! I had tried to clean the cable but there must have still been grease on it or the tape just wouldn't hold because it's so thin. However I tried to join it, it just came apart. 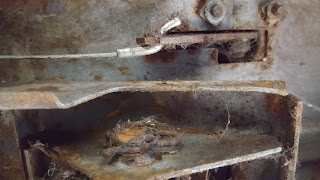 I gave up on this so pulled the old cable all the way out and attempted to push the new cable through. I put some grease on the cable and started to push. It got to approx 300mm from the end and wouldn't move! I guessed it must be stuck around the fan shroud area. I checked the tube in the fan shroud and this was ok. I needed to check behind the fan shroud but because I have twin carbs it's not easy. I ended up removing the air filter from the right-hand carb which allowed me to reach round and feel the hole in the tinware where the cable should enter the engine bay. I could feel the hole but nothing there, no sign of the cable.

I looked from under my bus but all you could see was the tube running from the front to the back which goes up above the gearbox. You can't see where it goes through the tin because of a cross member in the way. After a couple of hours trying a gave up as I wasn't getting anywhere! I posted the question on Facebook and a couple of people mentioned that there is a second piece of conduit which runs from where the tail of the gearbox is to the tinware but on most vehicles this part is missing!

The following day I went for another attempt. I checked out what people had mentioned about this conduit and they were right. In my case it does look like the same tube from front to back but it's a separate flexible piece. I tried to move the conduit towards the tinware and it slid, only about an inch. I checked back behind the fan shroud and could feel the end of the conduit. I went back to the wire and tried to feed it some more and this time it went straight through :o)

I can only think that because the conduit was not up against the tinware it was slightly out of alignment, so the wire was hitting the tin instead of going though the hole.

I put everything back together, Clamped up the wire again on the carb linkage and now all back up and running again.